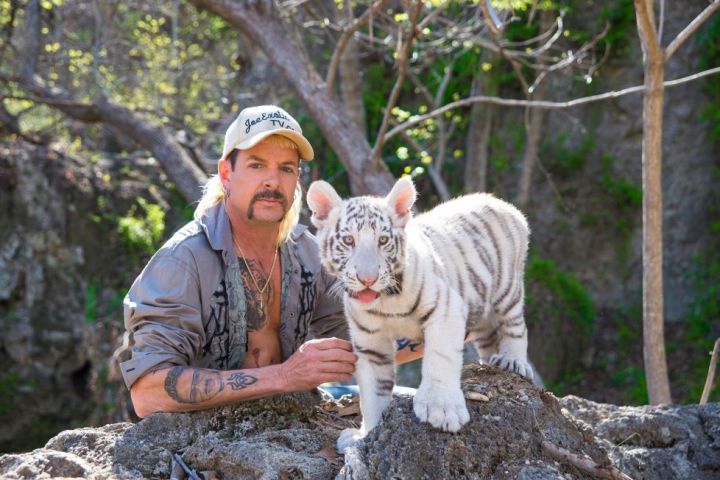 Warning: This is usually a blog about real music. Music like Childish Gambino, Soccer Mommy and Lil Uzi Vert. But today, this is a blog about Joe Exotic. If you want more of the real music, please close your computer now and come back next week.

Jack Kerouac once said that the only truth is music. Those words, which may be wrongly attributed, or misquoted, or completely false, usually don’t make for much more than a good thing to write on cheaply made apartment decorations.

But in Joe Exotic’s case, it really might be true. The former zookeeper, entertainer and presidential candidate has lived a life full of mystery, one that, thanks to Netflix, has been observed by more people than nearly any TV show in the country.

And then there’s the music. Tiger King’s popularity has become so absurdly mainstream that there are entire think pieces dedicated to Joe Exotic’s country music career.

There are stories about his bizarre YouTube presence, ones about the time he asked Marilyn Manson to endorse him for president and of course, ones about the fact that, despite claiming during Tiger King that he starts every morning by singing along to his own songs, he actually didn’t write or perform any of his recordings.

Yet somehow, none of those are even the most interesting details. And while the world is probably in for several more months of Carole Baskin murder theories and celebrity-backed amnesty campaigns, Joe Exotic will remain in a prison cell for the foreseeable future.

His story is on pause. It’s still a mystery. But in that mystery, there’s still truth, which is why there’s really no greater extension of Tiger King than its subject’s totally bonkers YouTube channel. The music is so richly absurd that it deserves its own encyclopedia volume, but to keep things short, here are the five most insane takeaways from Joe Exotic’s music videos.

The best way to experience the Tiger King’s music is from the beginning, as he intended it. His official YouTube channel, JoeExoticTV features a convenient playlist titled “Joe Exotic Music Video,” which presumably, contains music videos by Joe Exotic.

Except, it doesn’t? At least not completely. The playlist notably leaves out “Here Kitty Kitty,” by far the zookeeper’s most popular song. But even more strangely, the playlist starts with a completely unrelated video — a supercut of the NBC fantasy series Merlin soundtracked by John Farnham’s 1980s hit, “You’re The Voice.”

4. The one that’s all about how much women love him

Joe Exotic is openly gay, and that in no way excludes him from making songs about attractive he is to women. In fact, it’s sort of an incredible flex.

“Pretty Woman Lover” is a rockin’ blues track about heterosexual romance, but it’s also an oddly astute satire of country music tropes. Joe Exotic spends the entire track hinting at his sexuality, which often comes in the form of him hiding from crazed women inside of a limo, or on the roof of a bar.

3. The one about his father, who he supposedly hates

Joe Exotic reveals early on in Tiger King that after his father learned about his sexuality, he forbid his son from attending his funeral. That conversation reportedly caused the zookeeper to attempt suicide, getting into a car accident that spawned a long recovery and ultimately, his love of animals.

But that seemingly didn’t stop Joe from dedicating an entire song to his father. “The Sun Says,” released in late 2013, was nominally written in honor of Joe Exotic’s dad, who describes in the video description as his “biggest fan.”

2. There’s a strange ‘thunderstorm’ visual effect in several of the videos

“I Saw A Tiger” is easily Joe Exotic’s second most popular track, with nearly 2 million plays on YouTube. The song is oddly beautiful, and it positions itself as a fundraising effort to “save the tigers from China poaching.”

But it’s also a testing ground for one of the most inexplicable visual effects ever — the green-screen thunderstorm. Check out this segment of the video, in which Joe Exotic stands atop a pickup truck, singing his inspirational message as a terrifying cloud pulsates behind him.

You can find the same effect at several points during “Pretty Woman Lover,” usually placed behind Joe Exotic as he dances on a rooftop. Also, it’s prominent in “Do You Ever Wonder What Love Could Do?” — including at this moment, when its literally synced up with the word “thunder.”

1. The customers who would very much not like to be in a Joe Exotic music video

“Because You Love Me” is easily one of Joe Exotic’s stronger songs. It’s got a dancy beat, a bubblegum-sweet melody and a catchy, singable hook, plus the video has plenty of clips of Joe Exotic singing to his tigers.

But it’s also posed as a song and video “made with some customers” — and the customers don’t seem very happy. Throughout the clip, Joe Exotic parades around the same group of visitors, who almost never smile and oftentimes refuse to acknowledge him. At one point, a pre-teen in a Kevin Durant jersey turns away from his family to look back at the zookeeper with a face of total disappointment. It’s beautiful.